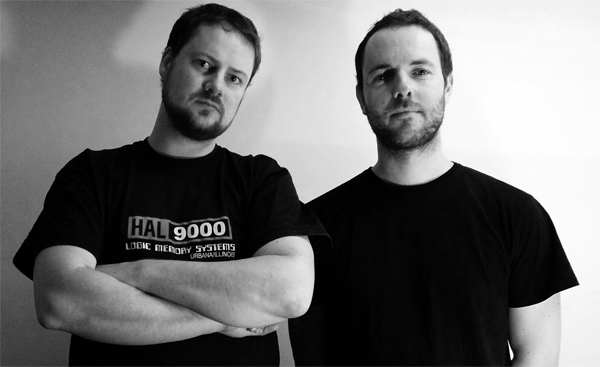 To many Posthuman will be a newly-discovered name but the duo have a release history that runs back over more than a decade, taking in releases for esteemed imprints such as B12, Skam and more with a back catalogue emcompassing a variety of styles within the electronic music sphere.

Their recent outings have been focused firmly on the dancefloor with the power of the legendary silver box harnessed fully. The next slab of vinyl to make its way out of their studio comes in the shape of the “Decompression EP” for Bodywork, three tracks of 303 goodness that showcase their production talents to the fullest and that have found favour with the likes of Ben Sims and Daniel Avery.

Check out the lead track below and you can pop on over to Juno to grab the vinyl.

The duo recently played the final I Love Acid party in London and put together the mindbogglingly good “30 Years of Acid” mix for Solid Steel so we thought we’d ask for a wee peek into their record bags for some lost 303 gems…over to Posthuman.

JOSH – from Plaid’s Peel Session, this skirts about as close to tribal/hippy vibes as possible without get drawn into the cheese. Love it.

JOSH – one of Armando’s later – and lesser known – releases on Trax. Acid might have dropped a little from fashion by ’94 but this is as good as anything he ever did.

RICH – I was working in Surface Noise (Record shop in Newcastle) when this came out, and I bought it there and then.

RICH – This is fucking awesome further in…keep listening. It was about 4 in the morning, off my head at Ben from Jazzfinger’s flat – he gave me his copy because I loved it so much.

Affie Yusuf – What Is It

JOSH – Affie is one of the most talented acid musicians I’ve ever met. He was killing it, back in the early 90′s on labels like Ferox and Force Inc.

RICH – More house than acid, and probably not that “lost”. Think I first heard it on a mix somewhere, possibly Bruce’s room in halls of residence at University.

JOSH – Egg still writes and plays today the same as he did back in the late 80′s – all original hardware. His early output easily matched Hardfloor for me but he never quite got the recognition he deserved.

JOSH – OK, not quite a “lost classic” as it’s only 4 years old – this was on the first release of my label Balkan Vinyl, and I only have one single copy of the vinyl left myself. I think this is destined to be a classic, it’s my absolute favourite track of anyone’s I’ve ever released and it never fails to rock a dancefloor.

Also here’s that amazing mix for Solid Steel in case you missed it:

Paul
Future Sound of London obsessive with a taste for moody house, techno and drum n bass. I was also rather partial to speed garage and am still slightly obsessed with early 90s rave. To keep up with more of my shocking banter or to get in touch you can get me on Google+ and Twitter.
Related Posts

Slyde vs MGMT – Time to Blow Your Mind – free download
We don’t normally dig mash ups at the Labs but this has some legs. Electro…